“The Phantom Of The Opera” by Creatio Arts Youth
Derby Theatre 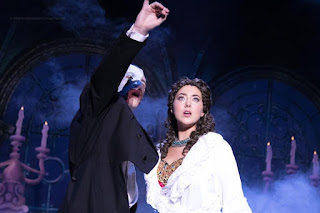 There can’t be many people who doesn’t know of this musical and the story of The Phantom.
Based on the French novel “Le Fantôme de l'Opéra” by Gaston Leroux, its central plot revolves around a beautiful soprano, Christine Daaé, who becomes the obsession of a mysterious, disfigured musical genius living in the subterranean labyrinth beneath the Opera Garnier.
The performing rights to this Andrew Lloyd-Webber classic were only released to amateur groups in 2013 but since then it’s been performed thousands of times over, giving local theatre companies a chance to show off their talented vocalists.just like tonight.
Here's a question for you?
What's the difference between a West End production of "Phantom" and Creatio's production?
Answer: As far as I could see, NOTHING! 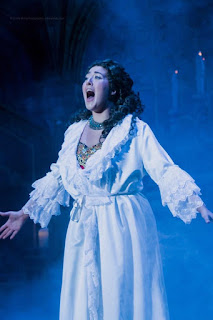 This production has made me fall in love with this musical all over again with it's gorgeous music and dramatic flair
Directed by Matt Powell and Aine O'Neill-Mason. This is the last show that Matt will be directing for Creatio as he's off to the Royal Central School of Speech and Drama as from September, but what a way to go out... on top, which is where's he's always been!
Musical Directors are Tom Watkins and Morris Fisher and in charge of the 26 strong orchestra. The glorious lush arrangements spill into the auditorium and from the first throbbing notes of the title song, the music pulls you in and swallows you up.
Such classic songs from musical theatre like "Music Of The Night", "Phantom Of The Opera", "All I Ask Of You", "Wishing You Were Somehow Here Again" and the brilliant seven part "Prima Donna"
Choreography is by Charli Richardson-Astle. As with everything to do with Creatio, this show is choreographed to perfection and style
There’s a massive cast for this production and that’s not counting the Ensemble
Paddy Stafford (The Phantom). This is Paddy's first major leading role and what a role. I sat there listening to him sing and thought, how could someone so young be so talented and have such an amazing mature voice, and such control and passion. 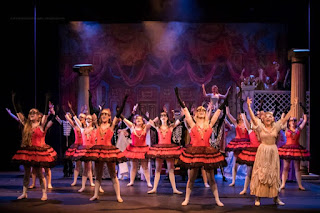 These songs are technically difficult to perform but Paddy made it all sound so easy. It's not often that, after a show, I look for the lead if I've never met them before, but on this occasion I had to find him and thank him for a brilliant show and shake his hand. This man is a West End star in the making.
But that can be said of all the actors on stage in this show.
Emily Cox (Christine). What an incredible voice she has. It sent a shiver down my spine.
Ryan Wiggins (Raoul). Another incredibly mature voice and performer. Another very passionate actor who gives everything he has in a performance
Oliver Wheddon (Monsieur Firmin). Ollie made me smile with his accent. Ollie is one of those people who 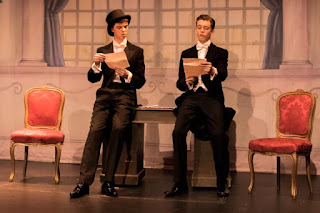 you smile in his company any way. His duets with Adam were wonderfully clipped. They sang as if there was just the one voice. Great timing and some nice comic lines from Ollie

Adam Griffiths-Vernon (Monsieur Andre) is a brilliant double act with Ollie but he's also an excellent singer as well. A nice sense of comedy timing coming through in this role.
Hope Redfern (Carlotta) debuted this role on Thursday night. Hope is another one with a lovely sense of comic timing as well as being the owner of a lovely voice as well.
Aaron Titterton (Piangi). The talent for both comedy and great singing in this production is absolutely first rate, and no more so than with Aaron. From the start his pronunciation of "Roma/Rome" and that look he gives is classic. 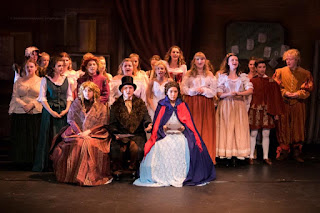 Grace Orgilll (Madame Giry). Oh my! What a role and what a performance. Another wonderfully mature and controlled performer.
Tammie Morgan (Meg Giry). This whole cast are just so good, there are no weak links anywhere.
Bradley Mcclean (Monsieur Reyer). Wonderfully authoritative keeping Piangi and Carlotta in line, musically.
Joe Morley (Buquet), Jack Readyhoof (Auctioneer/Fop), Kheenan Jones(Don Attilo plus several other roles) and
Ellie Simmonds (Fop) complete the more prominent roles, and then so many more ensemble actors and dancers.
Scenic Projects provided the amazing sets, all with the WOW factor. Looking in the programme at the long list of people working tirelessly behind the scenes, you just know the hard work and effort that has gone into bringing this production to fruition for Creatio. 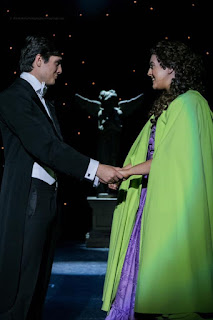 Matt Powell I am sure has had the word "easy" removed from his vocabulary because nothing he has done with Creatio or Streetlight come to that, has ever been easy. He has never taken the easy option, and I doubt he ever will. His cast and everyone behind this, and all of his shows put in so much of themselves and this shows.
The audience, which as far as I could see filled every seat in Derby Theatre, expressed their appreciation with extended applause after every song, and rightly so, stood at the end of the show. just looking at the faces of the actors at that time was an absolute joy because they knew we appreciated all their hard work.
I said that when I started to write this up, I'd try to keep it of reasonable length, but what can you do when there are so many wonderful things to say about a great group of people who perform to the highest standards possible.
“The Phantom Of the Opera” is at Derby Theatre until Saturday 15 July 2017.
Ticket prices are a very reasonable £15.00 to £17.50 and well worth it.
Posted by Kev Castle at 16:46