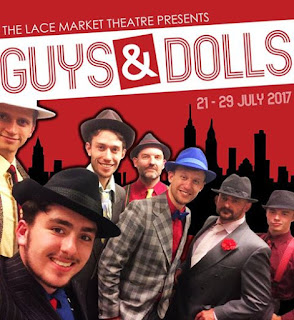 This is a musical for romantics everywhere and set in “Noo Yoik” with some brilliant characters, gamblers, gangsters and night club singers. It derives from the Damon Runyan’s stories of Broadway’s underworld, and especially about a Bible-quoting gambler, Nathan Detroit, who ends up dating a Salvation Army girl, Miss Adelaide.
The script is teeming with wittiness and this spills over into the lyrics of the instantly recognisable songs. “A Bushel and A Peck”, “Luck Be A Lady”, “Sit Down You’re Rocking The Boat”, “Sue Me”. “Take Back Your Mink”, “If I Were A Bell”, “I’ve Never Been In Love Before”.
The story is of Nathan Detroit and his 14 year old engagement to Miss Adelaide and Sky Masterson and a bet he made with Nathan to win $1000 to stage a crap game. The bet was to take Sarah Brown to Havana, but Sarah isn't such a pushover!
The Lace Market Theatre's closing production for this season is an absolute cracker of a show.
The sets rely mainly on projections, but they are used so well and with subtlety that they set the scenes without being obtrusive or looking out of place. This , as well as the sound design is by Matthew Allcock. 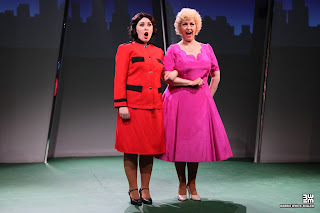 I've seen many of this cast in previous plays in the past at various theatres, but when you see them in a musical, you see a completely different side to them, another talent, and that's exciting to the viewer. And with all of the cast, the singing matched their acting ability, and the acting was brilliantly entertaining.
The casting of this show was spot on, nothing or no one I could see not being in the roles that they were given. Therefore I feel it only right to give everyone their due with a mention.
As the sign said on the journey back from Havana, "Fasten your seatbelts", this could be a long one......
Paul Johnson (Sky Masterson), Dermot Randall (Nathan Detroit),
Chris Sims (Nicely-Nicely Johnson), Matthew Thomason (Benny Southstreet),Roger Newman (Arvide Abernathy), Richard Ives (Rusty Charlie), Christopher Collins (Big Jule), Gareth Morris (Harry The Horse), Chris Teasdale (Lt. Brannigan), Tom Walters (Society Max), Kyle Stirland (Good Time Charlie), David Hope (Angie The Ox), Julian Phillips (Louie the Greek), Connah Porter (Dave The Dude), Roger Watson (Bookie Bob and Calvin), all incredibly entertaining and all coping well with the varied American accents. 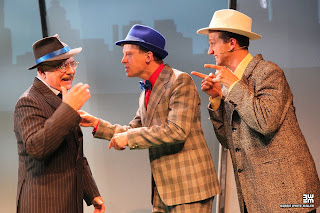 Fraser Wanless needs a special mention as he played several different characters from Joey Biltmore , a waiter, a drunk, Jose and a cop.
They're the "Guys" and her comes the "Dolls"......
Lucy Theobald (Sarah Brown), Eileen Frier-Kelsey (General Matilda Cartwright), Liza Pybus (Agatha), Anne Anne Mccarroll (Martha), Rebekah Blasdale-Smith (Ruth), Lucy Colgan (Mimi), Alison Biller (Miss Georgie), Jenny Scott (Miss Lili), Lucy Bailey (Miss Dandi), Everyone was great fun to watch and you could feel the excitement these ladies emitted from that stage.
Jackie Dunn as Miss Adelaide just has to be the star of the show. This role is so far removed from Jackie's own personality that when Miss Adelaide first appeared on stage, I had to look twice. She didn't look like Jackie and she definitely didn't sound like 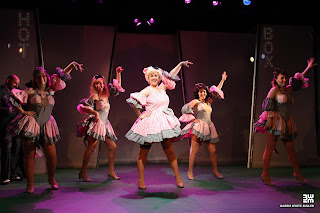 Jackie. This role shows what a wonderful character actor Jackie is, and what a wonderful singing voice she has, even singing in Miss Adelaide's "squeaky" voice and with a New York accent.
But Jackie is just one star among a sky fill of stars in this show.
Directed by Linda Croston, you can tell this was a labour of love for Linda. She got everything just perfect. The pace was good, the comic lines were delivered with timing. You'd expect that from Linda though because she has been behind so many successful musicals for several theatre companies over the years. She knows her stuff where musicals are concerned.
Set Design was courtesy of Max Bromley, and as I said earlier, it was, like everything else to do with this production, spot on.Whether set in the night club, The Hot Box, or in the Havana scenes, from the Mission to the underground "crap" shoot, everything was just right. 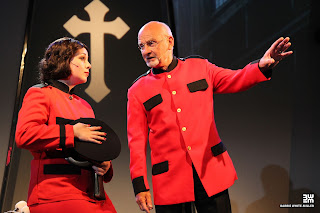 Musical Director was Stephen Williams, and while I knew that there would be no lush arrangements for this soundtrack, the simpler, jazzy arrangements by this three piece group worked really well and gave all of the vocalists a backing that didn't overpower the singer, but instead complemented their individual voices.All helped by a sensitive live sound mix from Simon Carter
Choreographer Lisa Lee did a cracking job with some really athletic and exciting dance moves.
With so many bodies on stage, Stage manager, Bex Mason may just have had her hands full, but that didn't show as everything ran as smooth as clockwork.
As you'd expect, being set in New York in the 1920's/1930's Gangster era, the costumes for this musical are incredibly classy and stylish, which also makes this musical the classy affair that it is. Jane Jim Brooks, Trish Hope, Jayne Richardson and Triple C Costumes deserve praise for the costumes. 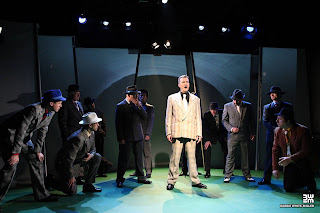 Herring,
Don’t leave it to lady luck to get your ticket on the door as that would be too much of a gamble. "Guys n Dolls" is a classic stage musical and Linda and her cast present a thoroughly entertaining show with laughs and great musical numbers and dance routines.
“Guys n Dolls” is being performed at the Nottingham Lace Market Theatre until Saturday 29 July 2017 with just a one day break on Sunday 23 July 2017.
Posted by Kev Castle at 16:14