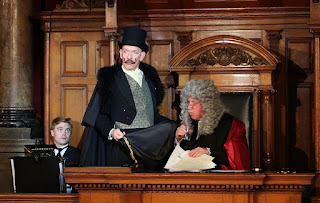 They do say that all good things come to an end and, unfortunately, so too does this year’s Colin McIntyre’s Classic Thriller Season after a slightly shorter and nomadic run for 2017.
I say nomadic but that’s just because their normal roost, the Nottingham Theatre Royal is under refurbishment. The first two plays were performed at the Nottingham Playhouse but here we are already at the third and final play, performed in the aptly chosen surroundings of the National Justice Museum, or to you and me The Galleries of Justice.
So what’s the story here, I hear you cry!
Well, Marie Lloyd, Queen of the comedy stage, is detained at the Stage Door of the Empire Palace of 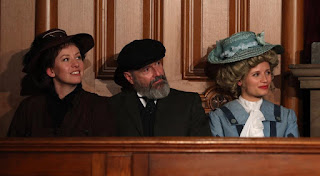 Varieties by the Nottingham Constabulary for the willful murder of magician, The Great Merconi. She is tried at the National Justice Museum, after he is found in his dressing room, apparently strangled by her garter…
Written by Karen Henson with yet another brilliant cast of regulars, all familiar to anyone who follow this wonderfully entertaining troupe of actors.
This is slightly different to the ones we’ve seen just recently with its slight lean towards the art of panto, plus there’s singing in this one. Well Marie Lloyd was known for her songs, and especially that slightly saucy sense of fun in her choice of song.
We have a generous smattering of music hall standards as well as some songs that, although have the 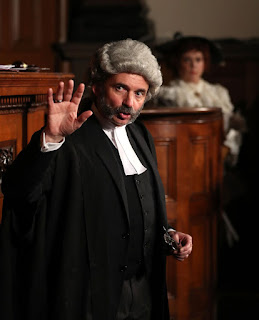 original lyrics, have new melodies attached to them, all of which wouldn't be out of place with the days of the Good Old Days. The original music was composed by John Goodman
Andrew Ryan doubles as The Great Merconi and also as Miss Sachei Aweigh, woman of mystery.Who is that veiled woman? What connection has she with Merconi and what is her real reason for her to be in Nottingham just at this time?
Andrew performs mystifying magical miracles and works the audience into his act to great amusement.
David Osmond plays the serious court usher, strangely called Mr Osmond, as well as tinkling the ivories for the accompanying tunes for this play
Susan Earnshaw was our Marie Lloyd, airing her vocals with some classic music hall faves like "A Bit Of A Ruin That Cromwell Knocked About A Bit", "My Old Man", "A Little Of What You Fancy" and with the whole ensemble in "Down At the Old Bull And Bush". A wonderful cheeky performance which left me with a big smile on my face.
Sarah Wynne Kordas played Claudia Dawn, mistress of the robes. It's strange that as soon as Sarah dons a wig and make up, she becomes completely unrecognisable. I had my suspicions about Claudia in this production, but was she the murderer? You'll have to go and see the play to find out! 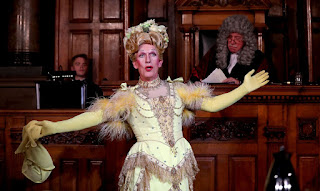 John Lyons was wonderfully almost "fuddy duddy" in this play as His Honour The Judge. A lovely comic role for John with some wonderful lines to deliver, and his "Macbeth" section is classic, plus he even gets a nod in to the role we know him best for. Lovely fun character for an actor who I could tell relished this part.
David Giltbrook played the barrister, Mr R Blowers. The glue that brought all the characters together, and even in the bit which didn't quite follow the script, Mr Giltbrook, with Mr Lyons, managed to cover and get back to the script without it looking too obvious; a sign of true professionalism and experience.
You probably won't see this though because as with all live theatre, no show is the same two performances on the run. 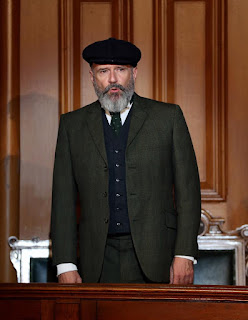 Jeremy Lloyd Thomas, played the stage door attendant, Mr Charlie Welkin. His one word answers, rising from the inaudible grunts to start with, gives rise to some comic moments from the Judge who apparently can translate these grunts perfectly! He sees and hears everything at the back door, so may have the motive for killing the mustachioed magic man, but for what gain?
Anna Mitchum plays Miss Lilly Lovage, who is reported to have been on the wrong end of Merconi's ire. Could this wee gentle lady have the strength though to strangle Merconi?
Who is the music hall murderer? Surely it would be too obvious for it to be Marie LLoyd, even though the weapon of choice was Marie's garter? Claudia Dawn the wardrobe mistress? Charlie Welkin, the back door man? Lilly Lovage? Miss Sachei Aweigh? Only one way to find out who and how and why!
Well first we have to try Marie Lloyd, and there is a jury of willing audience members to take this role on.
Karen Henson has written a wonderfully fun piece of theatre, and let's face it the court room is theatre anyway, so a perfect setting. The setting gives great atmosphere to the play as well as a sense of reality, almost making you a part of the whole story. there are many Nottingham landmarks 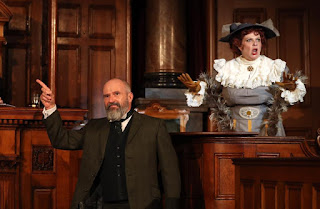 name checked in this play which really makes it more personal.
It's great fun, it's panto, it's music hall, and with these seasoned actors you won't feel guilty about enjoying yourself in court.
Wonderful costumes, as you'd expect, and that's one thing that I've really noticed about this season from TABS, the costumes have been one of many many highlights of this year's season.
This jury is in total agreement and we find this play guilty of being a thoroughly enjoyable romp.It'd be criminal not to pop down and see this piece of theatre
“Marie Lloyd and the Music Hall Murder” is at the National Justice Museum, High Pavement in Nottingham until Saturday 29 July 2017.
Posted by Kev Castle at 15:02