“Hannah and Hanna/The Jewish Wife”
Lace Market Theatre
“The Jewish Wife”, written by Bertolt Brecht, which is the first part of this double bill and is a one-act play focusing on the issue of a Jewish woman having to tell her German husband that she is planning to leave him to save his career as a first class physician at the clinic he works at. 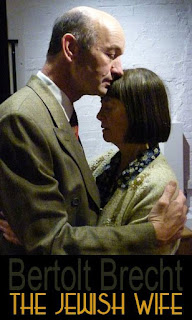 You can see the hurt in her eyes as she is still so in love with her husband but she is willing to make the sacrifice for his career
Mandy Hodgson (The Wife) tells the story as she slowly packs her case and makes calls to friends to ensure that her husband is cossetted in her absence. The emotion shows in Mandy's eyes and her voice at times cracks. Even though you know the inevitable is drawing near, you still want her to change her mind.
Daniel Bryant (The Husband) comes in near the end and you really want to shout out that his wife isn't just going for a few weeks. You can imagine Daniel as a doctor as he has that air about him.
Lorna McCullough has directed this play and one of the few directors who can make a minute of silence say more than words can say.
The second half of the double bill is "Hannah and Hanna".
It is 1999. Hannah is sixteen. She loves karaoke and her bloke Bullfrog; she hates her home town of Margate and the Kosovan asylum-seekers who have come to live there. Hanna is also sixteen. She loves karaoke and loves Margate and hates her home town of Kosovo..
What soon becomes apparent is that there are real similarities between Hannah's green and pleasant land and Hanna's bombed-out hell of Kosovo. In both, hatred is always bubbling just below the surface. The outlets for the hatred are very different though. 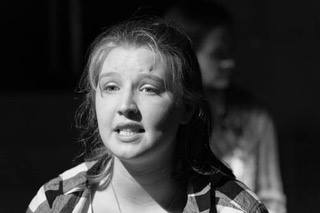 The two girls are eventually brought together through their love of singing and pop music. Kylie Minogue, Steps and Britney Spears have travelled to Kosovo and present a common language. Soon, English Hannah has to make the decision to become an adult and befriend the stateless Hanna or slavishly follow Bullfrog.
Their lives criss cross and one explosive incident one evening changes their opinions of the other forever.
Both plays are very moving and are willing to address serious political and racial issues. The language is, at times, shocking, and it's supposed to be to get the point of this play driven home.
The second play also provides a showcase for two excellent young actresses who give robust but sensitive performances. 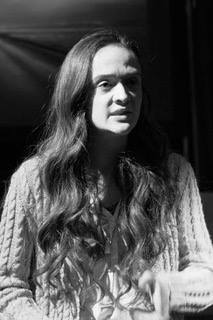 Rhiannon Jones (Hannah) is the aggressive one with fire in her eyes. The gradual softening of her character is a delight to watch.
Ellie Searston (Hanna) is the one with fire in her belly. I had to ask Director Wayne Parkin about Ellie as I was so impressed with her Kosovian accent which never faltered once throughout. Only when she changed character and changed voice did I even think that she wasn't South Eastern European.
Both of these young actors really got under the skin of their characters and produced an emotion packed, gritty performance which will get the fire in you ignited, for several reasons.
Directed by Wayne Parkin, this debut is, I imagine, what every first time director could wish for, A whopping success. The direction and the actors made me feel anger at the way that Hanna was treated by Hannah, and then empathy for how Hannah was treated by Bull and his gang. The ending, which I won't reveal is a bit of a shock!
Both performed in the studio upstairs which gives both of these emotive plays that extra something because of the close proximity, you get 100% sight of the emotion given by all four actors.
Both sets are minimal but with the wonderful scripts, who needs sets, but Keith Parkinson has provided just enough in both.
I've said in the past that if you don't notice the soundscape, then that is also a job well done. There's the Simon Carter. Hand in hand with the lighting design by Rose Dudley they created a perfect atmosphere for both plays. 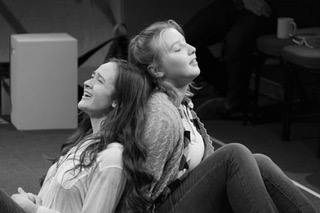 Why the upstairs space was not full to see these two plays, which are linked by their subject matter, I don't know because all involved in these presentations deserve to have their talents seen by more than the two thirds full audience. It was good to learn though that Tuesday night was full.
This double bill is on at The Lace Market Theatre until Saturday 23 September 2017 and I can guarantee that you'll be in the pub (or the upstairs bar) by 9.30 to have a chat about these plays.
Posted by Kev Castle at 14:59