"W;t" by Margaret Edson
Nottingham New Theatre.
The play starts with Dr. Vivian Bearing on stage in a hospital gown clearly suffering from the debilitating effects of cancer and multiple chemotherapy and radiation treatments. The opening is pretty shocking, as Bearing starts out saying that she is in stage four, the final stage, of metastatic ovarian cancer. The audience, through flashbacks, gets to see her agree to a new experimental treatment and watch how she is affected. Wit was Edson's only work as a playwright.
I always say that a play should leave its' audience feeling some emotion and boy did this play do that with audience members visibly emotional. 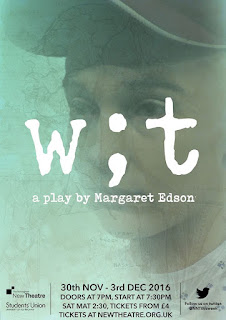 I think that I can say that this is probably one of the most powerful and emotional plays that I have seen performed at the New Theatre, and I've seen quite a few really excellent plays there.
Just when I think I've seen one excellent show, they go and top that with yet another. How high can that bar be raised by these talented students.
The script is very well paced, not afraid to leave gaps to emphasise the emotion and bereft feelings of Dr Bearing but allowing the audience to take in the script as well as feel the emotion from the actors.
But even though this play is about a woman facing death by ovarian cancer, there's a lot of humour written into the script, and that light and shade is played out with great confidence by the cast.
Lois Baglin (Dr Bearing) is exceptional in the main role and has the majority of the script to perform. She pours every bit of emotion into the role and the final scenes are heart-breaking to watch as she struggles through the pain of the cancer, through her heart attack and the scene where she dies, leaves the hospital bed and heads into "the light" is just jaw-dropping. This is Lois' first production for the Nottingham New Theatre, and if that's her debut, I can't wait to see how she tops that. Lois is an actor who has the ability to go as far as she wants to go in this field.
Lois isn't the only actor though who stood out because this was a cast of immense talent; some making their NNT debut, some with a list of credits already under their belts.
Bertie Beeching (Jason Posner MD) portrayed the over-worked doctor who was once taught by Dr Bearing whose respect for his former tutor was clear to see. Bertie also made his debut NNT performance here, and another who should go far with drama
Gigi George (Susie Monahan) was the nurse who tended to Bearing in her final hours, and who actually treated her like a human instead of an experiment. There was a lovely human touch where Susie rubbed oil into Dr Bearings hands, simple but so effective.
Joe Hincks (Harvey Kelekian MD) adds another brilliant role to his ever growing list of theatre credits after his role in "The Importance Of Being Earnest" earlier in the year. I've seen Joe in several different plays over the last year or so, every one different, but nice to see something a little more serious, which in turn exposed his versatility.
Izzie Masters (Professor E.M. Ashford), has aged for this role as Bearings' mentor, the only one who really seemed to understand her. A brilliant part played with wonderful understanding of the character. Another talent who is building a pretty impressive roster of various roles for her acting CV.
The three medical students, played by Darcey Graham, Beth Mullen and Andrew Houghton added a realistic side of being a patient in hospital, being asked to pass judgement on the symptoms of the case study.
This is a hospital drama and the props for this were the real thing sourced from the University Hospital (QMC). This gave the whole play the ultimate feel of realism and professionalism.
Amazingly well directed by Will Berrington, probably not the easiest thing he has had to turn his directorial hand to, but what a brilliant result he has given. Equally well produced by Dave Porter.
The make up and prosthetics for Dr Bearing were so realistic and quite shocking which took your breath away at first sight and the incredible work of Lisa Gier.
Nathan Penney's lighting design was also a wonder and added much to the feel of the play. the lighting and the sound design, for me, often goes hand in hand and complimenting the light design with an equally emotive sound design by Dave Porter and Nathan Penney.

Set in America, the accents for the doctors were really natural sounding and didn't waver at all. Dr Bearing's typically British accent was crystal clarity and a lovely opposition to the U.S. twang.This team had an accent coach to help get this just right, so thanks to Gil Eplan-Frankel for this guidance.there's nothing worse than hearing a "roving" accent because it detracts from the drama, but these accents were spot on.
I loved this play, new as it was to me. I loved the passion injected by the cast and I loved the great emotion shown by, not only the cast, but evoked into the audience. This play is not soporific, quite the opposite in fact.
"W;t" is being performed at the Nottingham New Theatre until Saturday 3 December 2016. if you like an intelligent play with an amazing cast and production and technical crew, a play that may make you cry, but will have you talking about it afterwards, then this is the one for you.
Posted by Kev Castle at 15:44