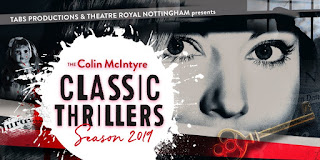 The first play choice for this year’s Colin McIntyre Classic Thriller Season is a thriller in every sense of the word. Written by the same man who brought us “Dial M For Murder”, the play follows the story of Susy, a blind woman. who left alone in her apartment becomes embroiled with a group of conmen hatching an elaborate scam which revolves around a toy doll. As the tension notches up, Susy is left to fend for herself but with the phone line cut dead and the house plunged into darkness, can Susy outwit the murderous visitors? 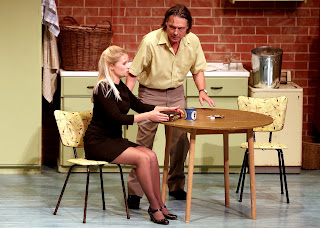 This is the first time that I've seen this play and I was agog, not knowing who would be the victor, and how.
When the curtain is raised, it gives you time to soak in the wonderful set for a short while before that first knock on the door starts the ball rolling.
From the start we know who the bad guys are, but that old adage "honour among thieves" does not belong with this clan. I didn't see that final twist coming though!
Regular Thriller Season followers will be pleased to see this well recognised cast, with one new face to welcome into the fold, Juliette Strobel who plays Gloria, the child helper/friend of Susy. 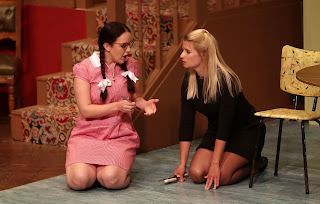 Chris Sheridan plays Mike, one of the three bad guys along with David Martin (Croker) and David Gilbrook (Roat), who looks very different without his facial hair. This trio know how to ramp up the menacing atmosphere.
John Goodrum, who seems to look younger every year, plays photographer Sam Henderson, husband to Susy Henderson.
Anna Mitcham really got under the skin of blind Susy, and the physicality of this role is superb as she manoeuvres her way around the set. Anna removed all the instinctiveness of a seeing person, especially when she ascends those stairs. 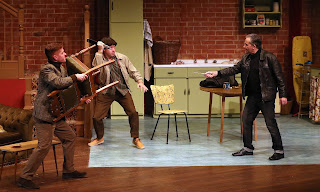 Directed by Karen Henson who really knows how to inject that uneasy feeling into a play. Karen gets the best out of her cast, and I know the cast know what Karen wants from them, and they deliver.
I mentioned the set, and it is one of those sets that you know you could live in yourself. Every little detail was included for realism, even down to the food in the fridge, the cutlery in the drawers and the many props that make this set look like a home. Sarah Wynne Kordas is no stranger to creating wonderful sets and she has done it again with this classic 1960's feel. 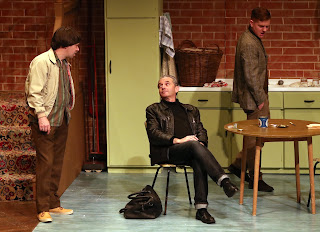 The plays title gives. anyone who like me didn't know or hadn't seen the play, a clue that maybe near the end, something may be happening in the dark, especially with Susy being blind. So at some stage I expected a black out on stage. This was done gradually and with effect. This end section as well as the other lighting designs was the responsibility of Keith Tuttle.
I've always said that the thinning of the Light Design and the Sound Design make or break a play and when it's a non musical piece of theatre, that creeping feeling is brought on by both designers. The sound cues were spot on and gave you the impression that things were happening the other side of the front door and beyond. David Gilbrook created the 3D soundscape. 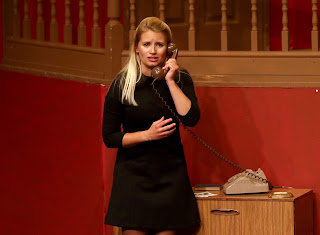 There are a couple of real jumpy moments but it's that realisation of what is to come, or what you think is to come, along with the actor's reactions and the incidental music that make this thriller a classic. And let's face it, nobody makes a thriller a classic thriller like Tabs Productions. It's good to have them back, and it's great to see such a full theatre appreciating the work this production company produce.
“Wait Until Dark” is at the Nottingham Theatre Royal until Saturday 3 August.
Posted by Kev Castle at 15:05