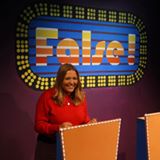 Yet again the Nottingham New Theatre present something completely new to me, educating me and expanding my list of viewed theatre productions. And what a contrast to "Fairytale Heart" earlier this week.
Welcome to "False!", the quiz show where there are no questions, only statements, where every statement is a lie, and where the prize is nothing less than the truth.
Everyone's favourite quizmaster, Daniel Caplin, gives tonight's gifted contestants the chance to play for the ultimate prize - to discover what lies behind the Door of Truth. Newcomer Sandra has always been desperate to find out and she's more than a threat to our reigning champion, Molly. Tonight, there is even more to play for as she competes with the other new contestant, Ben. Can the show survive what she discovers? 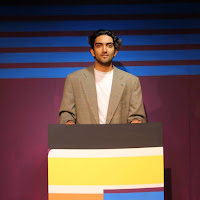 Much as I'd love to tell you more than this about what happens but that would spoil the whole story for you, and having not done any research about this play before seeing it, I got the full impact, which left me open mouthed and reeling from the unexpected ending.
The set has a lovely retro feel to it and the audience play a part in the play in the sense that they are the audience to the game show’s live recording itself and encouraged to clap when needed. Having been in the audience for “Family Fortunes” at Central TV many years ago, this brings back memories of the fourth wall breaking of the floor manager and the unexpectedness of what is said or done.
The fun starts as you get your ticket which is a disclaimer you sign, which is what happens at any TV recorded or live show, and this alone fires you up for the show.
Director Zoe Smith has done a cracking job here with the tension, and there is tension and an air of expectation in any live TV studio. I've been lucky enough to have been there a few times. Again i am not going to say too much but Zoe has created something very special along with Producer, Laura Wolczyk and Production Assistant, Salman Arif. 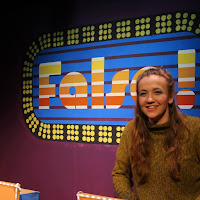 Maddy Strauss is the star - among stars - of this piece and her final monologue is packed with emotion and her story of being on "Quiz Show" will....... well I couldn't possibly tell you without revealing too much, so I won't!
Ben Standish plays the other new contestant on the show, Ben. Ben - the character - is.... there I go again wanting to tell you but to say anything would spoil what may or may not happen on live TV.
Rohan Rakhit is brilliant as the cheesy quiz show host.
Cameron Brett is the floor manager, Gerry, who is almost as cheesy as the show host.
Nicola Lang is the current quiz show reigning champion, Molly, who has been winning for the last 14 weeks, but is her time up? Is her fate on the show in the hands of fellow contestants Ben and Molly or......... sorry, there I go again teasing you!
James Curling provides the Voice, or in other words the voice over man who we know has one of those rich voices who give the scores, the prizes etc etc. 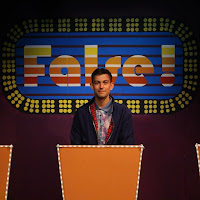 Nottingham New Theatre have such a strong technical and production crew that they need mentions as well.
Nathan Penney (Technical Director), Florence Bell (Assistant Technical Director), Ben Woodford (Lighting Designer), Zoe Smith (Shadow Lighting Director), Emily Dimino (Sound Designer), Darcey Graham (Assistant Sound Designer),
Bertie Beeching (Video Designer), Sam Osborne (Video Operator), Laura Wolczyk (Set Designer - which as I said earlier was rather wonderful), Nadia Elalfi (Set Assistant) and a host of stage managers, technical operators making sure that this show was the success that it was.
University is a place of education but I've found out that my theatrical education has been expanded by talented groups like these with people who can fit in with any local theatre group and would be a boon to any production, be it in the spotlight or behind the scenes.
“Quiz Show” is at the Nottingham New Theatre until Saturday 28 April 2018 and I urge you to see this extremely dark but incredibly entertaining piece of theatre while it's here to see at such a very competitive ticket price.
Posted by Kev Castle at 15:14