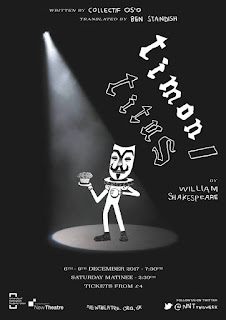 We’re advised that “This is Shakespeare… but you won’t recognise it.” Titus Andronicus and Timon of Athens merged as one with a common thread running through, both money and greed, something that is as relevant today as ever.
Written by a group of French students calling themselves Collectif OS'O, the play was translated by NNT student and Director of this play, Ben Standish. That in itself is impressive enough because to translate a whole 2 hours and 25 minutes of a play from French to English and retain the comedy is some going.
I'll admit that by the end of the first act, I was still unsure as to what to make of this play, I didn't really know what was going on half of the time, but by the end of the play, I managed (just) to piece it all together.
The title itself is a bit of a curveball because I thought at first that it was two of Shakespeares's plays mashed together. First mistake on my part. The whole title of the play is “Timon/Titus by William Shakespeare” and not as I first thought “Timon/Titus" by William Shakespeare. You can see how confused I can get!
Anyway, it all starts very moody with Milos (Jamie Watt) booming voice and a set littered with dead bodies. And then it turned into an introduction, almost apologising that we wouldn't be seeing "Titus Andronicus" or "Timon of Athens". then we were treated to a potted version of the plays recreated with dolls and puppets! How bizarre I thought! 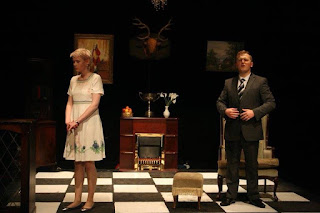 The warnings given before we entered the theatre and in the programme about themes of an adult nature and violence including limb mutilation were all there but with dolls. Well there was no contravention of the trade description act either.
Then came a political discussion about money debts, greed, guilt, in the style of one of those TV discussion shows. then to the chimes of Pink Floyd's "Money", the meat of the play was served up which ended in multiple murders, all done ion the best possible taste and great humour.
In between the "drama" inserts there was a very clever, and that's the phrase which describes the whole play, "very clever", animated film section of gains, debt, losses, business practices and Adam and Eve etc, which also showed the timing of the actors against the filmed sections. 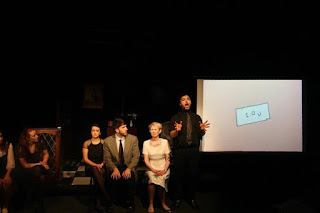 The entire group were great fun to watch and you can see the hard work that has gone into this show from every angle. If you can imagine Shakespeare crossed with Monty Python crossed with "The Wright Show", that's the feel of what to expect.
Yet again, a very talented cast, which is what I've now come to expect from NNT. Miguel Barrulas (Calvin Casar), Georgie Brand (Andre Penelope), Grace Williams (Cordella Esme), Emma Pallett (Tamara), Cameron Brett (William Merchant), Emma Summerton (Adelaide Merchant) and Jamie Watt(Migos).presented a show with a difference and with great energy. You, like me, may not quite understand the whole concept, but they fulfilled their promise to make me smile.
Great cast, a wonderful production and tech team and a brilliant set as well.
“Timon/Titus by William Shakespeare” is being performed at the Nottingham New Theatre until Saturday 9 December 2017.
Posted by Kev Castle at 16:44