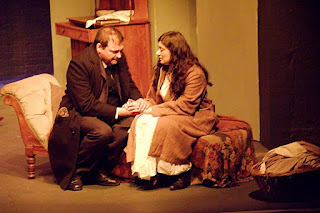 The tale of Lizzie Holroyd set in Brinsley, a Midlands mining community, a century ago is brutal and gritty. This was Lawrence’s second play, written in 1910 but only published in 1914.
The play's action is set in the kitchen of a miner’s cottage. Elizabeth Holroyd is an educated woman with refined sensibilities, struggling to make a good home for her two children, Minnie and Jack, in the grime and poverty of a Nottinghamshire mining town. Poverty is not the only problem she faces, for her husband, a miner, is a brutish man, prone to fighting, drinking and spending his evenings in the pub.
Blackmore, a mine electrician, recognises Mrs Holroyd as a kindred spirit, and asks her to leave her husband for him, promising to make a new life for her and her children in faraway Spain.
Matters come to a head when Mr Holroyd arrives home from the pub one evening in the company of two strange women, Clara and Laura,‘hussies’ who are his drinking and dancing partners. It soon becomes apparent that his relationship with one of the women, Clara, is more than casual. 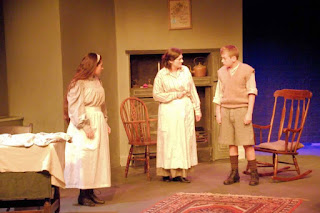 One evening later, Mr Holroyd once again fails to return home after work. Believing that he has gone to the pub as usual, Mrs Holroyd begins to take Blackmore’s proposal more seriously. However, she then learns that there has been an accident at the mine.
Clare Choubey (Mrs Holdroyd) really comes into her own in Act two as she shows a sensitive side as she is tending to her husband. A complete contrast to Act One where the situation is very different.
Phillip Burn (Holroyd), actually looks very much like Lawrence with his facial hair. I can't believe it's been six years since I saw him in "Me Mam Sez" and this is his "comeback" performance. I thought that he was a little restrained but this is opening night. 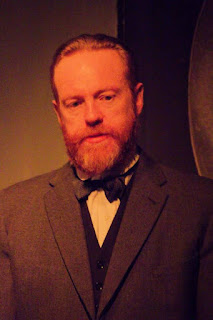 Malcolm Todd (Blackmore) absolutely nailed the regional accent and he delivered an emotion packed characterisation of the lovelorn electrician.
Hazel Salisbury (Grandmother), although only in the play in the second part, she made an impression and loved the way she warmed herself on the open fire; something that took me back to seeing my mother in the mornings warming herself.
Tamzin Grayson (Clara) was a delight to watch as one half of the pair of "hussies". Fun and fancy free performance with a natural fluidity.
Claudia Langley-Mills (Laura) was her partner in crime as the other hussie.
Henry Vervoorts (Jack) makes his debut with the Lace Market Theatre and a very confident debut this was as well. A very nice natural feel about the character and he handled the accent really well.
Georgia Feghali (Minnie) again convincing as the Holrroyd daughter. She bought the fun child like feel to her character.
Stephen Herring (Manager), Aaron Connelly (Rigley) and
Sam Howitt and Malcolm Edwards play the miners.who delivered the news to Mrs Holroyd. 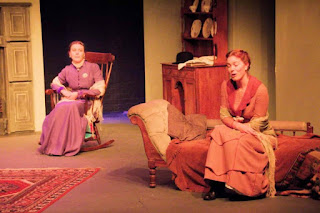 Directed by David Dunford, he managed to bring the Eastwood/Brinsley feel of the early 1900s mining community back to life on stage.
The set was designed by Peter Hillier and Gill Newman and what a lovely set this was. the fire in the grate may not have been real but made you feel warm just looking at it, and I loved the appropriate props that went with the piece. It's the little things that make the difference. i just wish that the set had a physical door as it seemed strange to see all the characters entering and exiting through an invisible portal.
Lighting Design is by Phillip Anthony and the Sound Design is by Darren Coxon. Really getting the atmosphere going with the bleakness of the miner's small and dark kitchen, when not lit by candles. The brass band sound creating a "Hovis" feel, and strangely enough, quite a seasonal sound. Brass bands do that to me! 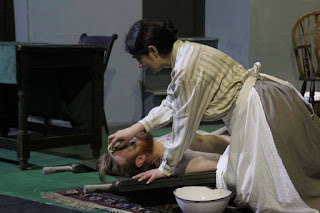 Working with the actors to get the dialect right is voice and dialect coach Janice White and every one of these actors just about cracked this regional accent. Accents can be the most difficult thing to crack, and especially when it's a fairly regional one. I could tell the work that's gone into this area of the play and it really created that special feel to Lawrence's work.
At under two hours with an interval, you won't have time to look at your watch, not that you'll have any need to because the play really captures the local feel of the mining community. A talented bunch of actors and a decent story, albeit not being a happy ending, makes this one play really worth taking time out to see.
“The Widowing Of Mrs Holroyd” is at the Lace Market Theatre until Saturday 18 November 2017
Posted by Kev Castle at 15:06